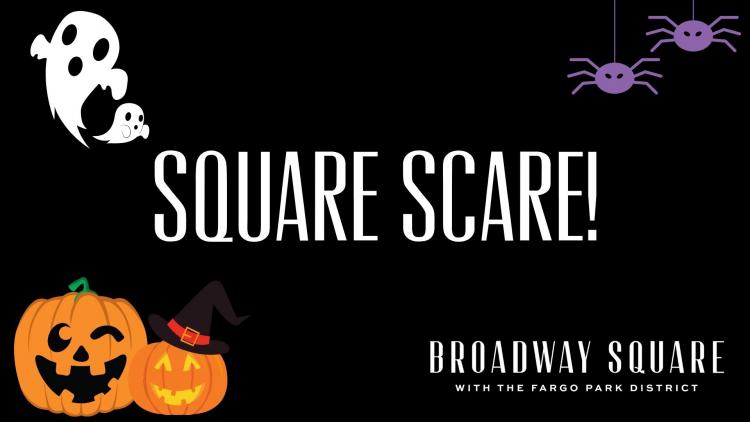 Stop by Broadway Square on Halloween and enjoy spooky activities! Don't be scared, this is a family-friendly event, so come by for an afternoon full of Halloween activities.

This free, outdoor Fargo Park District event includes pumpkin painting, a costume parade, trick-or treating and more! There are multiple contests to enter for a chance at winning prizes.

Purchase a fresh, locally grown pumpkin from Bill Erbes Farm for either $2.50 or $5.00 (depending on size) and paint it as you wish or according to some provided themes. Enter your pumpkin into the Painted Pumpkin Contest for a chance at winning a prize! Painted pumpkins are judged at the end of the event and prizes are awarded.

Bring your spooky or stylish pre-carved pumpkin to The Square to enter the Carved Pumpkin Contest. Submit your carved pumpkin by 3:00 pm. Make sure to check out all the pumpkins and vote for your favorite ones. Awards are given out at the end of the event.

We'll have some fun Halloween-themed games set up, including a scavenger hunt, mummy bowling and witchy ring toss.

Grab a photo at our Festive Photo Spot! This painted pumpkin backdrop has hay bales, photo props and more available for event attendees to capture a Halloween (or fall) photo to share with friends and family.

The Festive Photo Spot is also the final moment of the Costume parade and each contestant is welcome to grab a photo at it.

The Costume Parade starts at 3:00 pm, with a parade around The Square. Gather to watch the parade, cheer on participants' creativity and vote on your favorite costumes. Costume awards are announced at the end of Square Scare, including Best Overall Costume, Spookiest Costume and more to be announced.

Costume Award Divisions include kids (12 and under) and adults (ages 13+).

A collection of Downtown Fargo businesses are gathering at Square Scare, providing information on their business/organization and handing out candy or healthy food items to trick-or-treating event attendees.

Are you a local business interested in participating? Learn more and fill out a form.

Cottonwood Cider House is available at the event for you to purchase and try their cider and hard ciders.